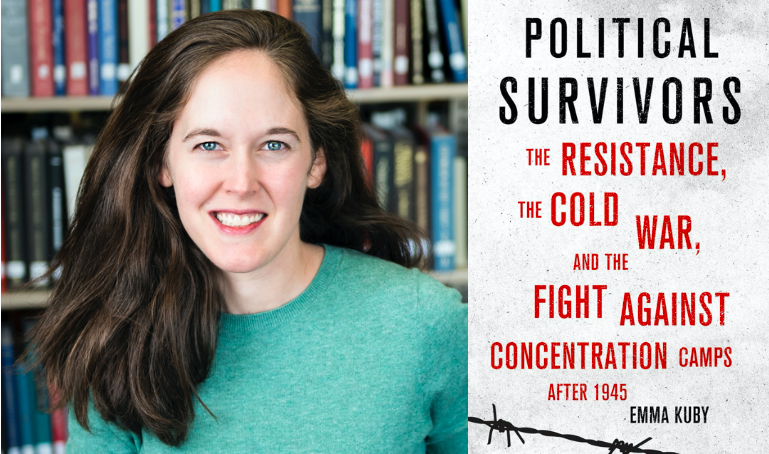 Emma Kuby (Northern Illinois University) has received the 2020 European Studies Book Award for her book Political Survivors: The Resistance, the Cold War, and the Fight against Concentration Camps after 1945.

Emma Kuby’s Political Survivors: The Resistance, the Cold War, and the Fight Against Concentration Camps After 1945 presents its readers with a moving narrative about the ambitions of the International Commission against the Concentration Camp Regime (CICRC), which the former Buchenwald inmate and French intellectual David Rousset had established in 1949. The book carefully situates this body within French political history, reconstructing how it calibrated the important part it played in shaping the nation’s discourse on how to commemorate the Shoah and the Resistance. It follows the organization’s endeavors in scrutinizing “concentrationary” conditions in other parts of the world, most notably in Soviet Union, but also in the West (in Greece and Spain).

And yet, Kuby does not shy away from discussing the founders’ limitations and disappointments as they had difficulties addressing, for example, the plight of the Algerians fighting for independence from France. CICRC’s conceptualization of the experience of the Nazi camps, as well as its “persistently non-racialized understanding of how state violence tended to select its victims” (212) made it difficult for the organization to preserve a potent role for itself in France, just as Rousset himself began, starting in the 1970s, to slip out of public discourse as a new generation of intellectuals succeeded in formulating new paradigms to understand the workings of totalitarian regimes and of ethnic genocide, and in appreciating ethnic and religious difference.

Political Survivor’s historical scope, as well as its lucid prose, appeal to a broad and interdisciplinary audience—an important feature as we are urgently being asked to confront and prevent state atrocity.

Emma Kuby is Assistant Professor of History at Northern Illinois University. A specialist in modern France and its overseas empire, she has authored numerous articles on violence, justice, and memory in post-war Europe.

The Book Award Committee has awarded Honorable Mention to Heidi Tworek of the University of British Columbia for her book News from Germany: The Competition to Control World Communications, 1900–1945.

Heidi Tworek’s News from Germany is smart, well-written, and engaging. The book offers a compelling history of news—how Europeans got it and consumed it, and why that matters.  Tworek covers transnational history exceedingly well by pivoting from histories of cross-border news agencies to histories of national or imperial exigency. News from Germany presents a broad methodological challenge, asking us to reconsider how we as scholars use news as a primary text, not only in studying Germany during 1900 to 1945, but in any region or era.

Heidi J. S. Tworek is Assistant Professor of History at the University of British Columbia. She is also a non-resident fellow at both the German Marshall Fund of the United States and the Canadian Global Affairs Institute and is Project Coordinator of the United Nations History Project.